Mrs. Royer joined the faculty in 2010. She teaches French to students in grades K-8.  Anne has taught French previously at VES and Lynchburg City Schools. At James River, she enjoys the fact that she teaches small classes in all grade levels, K-8; "It allows me to help and get to know each child."

Anne grew up in Duxbury, Massachusetts, and has one brother and one sister. When it was time for college, she attended St. Lawrence University in Canton, N.Y., from which she graduated with a French major.  Anne went on to earn her M.Ed. in Curriculum and Instruction from the University of Vermont.

Anne and her husband, David, have three daughters and a yellow lab named Luna. Their youngest daughter started at James River when she was in fifth grade and graduated from James River in 2015. The family now resides in Lynchburg, but lived in Paris from July 2005 through June 2007 and again from August 2008 through June 2010. While in France, they worked in French-speaking businesses, went to French-speaking schools, and immersed themselves in French culture. Anne commented, "It was a challenging but very memorable and rewarding experience." In her spare time, Anne enjoys sailing, taking walks with Luna, and having fun with her family. 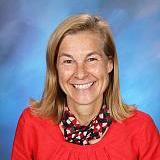