Paddy Braunstein graduated from Randolph-Macon Woman's College with her B.A. in psychology. A lifelong musician, she first taught music at JRDS from 1996-2003. She took leave to tour professionally as a backup singer for a national act and later joined the award-winning songwriting organization, Kid Pan Alley, writing over 300 songs with more than 7,500 children nationwide. She was an adjunct instructor of guitar and songwriting at Sweet Briar College for several years and continues to teach private piano, voice, and guitar lessons in her home in Forest, VA.
Mrs. Braunstein returned to James River in 2012. She believes strongly in empowering children to find their individual voice and learn to express their creative imaginations.
When not teaching, Paddy most enjoys time at the lake with her husband, Glenn, and their five young grandchildren. 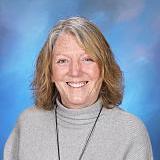