Mrs. Anne Taylor was hired in 2004 and quickly became Señora Taylor to one and all.
A journalism major at Lynchburg College, Señora Taylor also earned a degree in Spanish. Her love of the Spanish language began as a child when she lived in Asunción, Paraguay. She has continued her study of Spanish through various professional development experiences, including travel and study abroad. Anne and her husband, Rodney, reside in Amherst. All three of their daughters are James River graduates. 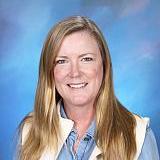