Originally from St. Louis, Missouri, Leigh started her teaching career in Bedford County, Virginia in 2004 after graduating from Virginia Tech. After teaching band at Bedford Middle School and Liberty High School for four years, Leigh left to pursue her master’s degree in Music Education at the University of Maryland-College Park. Upon returning to Bedford County, Leigh was fortunate enough to find the wonderful people at James River Day School, and began teaching band here in 2011. By 2012, Leigh was teaching band, elementary general music, and beginning violin. In 2015, she added orchestra director to her list of duties at James River Day School.
Leigh met her husband, Justin, at Virginia Tech in the marching band, the Marching Virginians, in 2000. They got married in 2006 and have two sons, Jack and Callan, and a boxer named Chloe. Leigh and her family love traveling, especially to places where they can scuba dive or attend exciting musical performances. Every fall, you will find them in Blacksburg at the football games cheering on the Hokies. Leigh is the adjunct professor of saxophone at Lynchburg College and clarinet at Randolph College, she also teaches private clarinet and saxophone lessons in the evenings to middle and high school students in the Lynchburg/Bedford area. When time permits, she performs with various ensembles within the community. 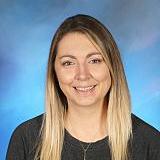