Rob Woods graduated from the University of Wales in 2001 with a B.A. in education. Before moving to the U.S., Rob taught English to European summer school students at Trinity College-Carmarthen. After a long distance relationship with his now wife, Sarah, he moved to the United States in 2006.
Since moving to the States in 2006, he has taught as a substitute in Seattle's Shoreline School District and here at James River. Sandwiched between those, Mr. Woods taught middle school students at an 'at risk' charter school in Albuquerque, NM for four years. There, he was responsible for teaching science and PE, with a focus on remediation. Rob said, "These years were humbling for me as it opened my eyes to the challenges that so many children and their families face."
Rob took an extended break from teaching when his son arrived in 2012, followed two years later by his daughter. It has been his privilege to take care of his family while his wife, Sarah, finished her medical training and began practicing. Rob commented, "I will cherish those six years forever."
When their youngest joined JRDS as a kindergartener in 2019, Rob jumped back into education and became our substitute coordinator. In the summer of 2020, when the lower school P.E. position opened up, he applied for the position and was appointed as our K-5 physical education teacher. Now, with both children attending James River, Rob is excited to be a member of the James River faculty. He said, "I knew very early on that this was the place I wanted to be, and when the opportunity arose to teach lower school PE, I simply couldn't refuse."
As for the Woods children, Rob said,  "Our children are students at JRDS and couldn't be happier."
Rob's other passion in life is soccer, Liverpool Football Club in particular. He has over 30 years playing experience and a decade's worth of coaching. He is a nationally licensed soccer coach and very passionate about coaching. Rob has coached all ages from pre-k all the way through to adult leagues. He is the coach for the the seventh and eighth grade soccer teams and looks forward to sharing his love of the game with them and helping them all to fulfill their potential.
When enjoying time together as a family, the Woods enjoy hiking and doing things outside. Having family all over the world also means they enjoy travelling as often as possible. 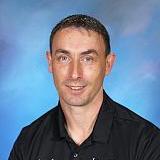